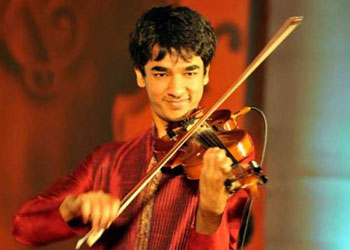 Hailed as “the new king of Indian classical violin” (The Times of India), accolades and praise sit lightly on the shoulders of Ambi Subramaniam, who has several major accomplishments under his belt. The violin maestro who pursued BBM at the Center for Management Studies, Jain (Deemed-to-be University) is the son of India’s violin icon Padma Shri Dr. L. Subramaniam. Ambi, who has the serenity of an Indian musician and the magnetism of a western star has topped the prestigious Associated Board Royal School of Music’s violin exams, securing distinctions and special awards.

Constantly touring the world by giving solo and duet performances, Ambi Subramaniam has conquered every audience with the elegance and virtuosity of his style. Menuhin Festival in Gstaad, the Lincoln Center out of Doors Festival, the Jay Pritzker Pavillion in Chicago, and the Centenary Celebration of the Bangalore Gayana Samaj are some of the famous festivals where Ambi brings out his enchanting charisma enthralling his fans. He is also a featured soloist for the Sounds of India program featuring talented instrumentalists from around the country.