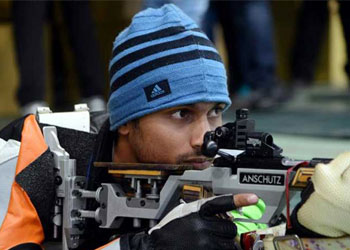 Rakesh Manpat is a shooter of unquestionable talent; he has been in the limelight ever since he beat his mentor Gagan Narang during the 2013 National Shooting Championship. He is trying to bring the much-needed consistency into his game that is required to take him to the next level. Read on to find out more.

Do you remember your first shot and the gun that you used? Was it on target?

My first shots I can remember were when I was in class 7. I was able to shoot three bullets at 25m within 5cms. I was slightly disappointed though that it was only three. I used a .22 caliber open sight Czech Republic Brno-make rifle with KF bullets made in India.

How crucial a role did NCC play in your development as a shooter?

NCC did play a role in the beginning. In class 8 and 9, I was in the junior NCC division and got an opportunity to shoot. In class 11 at Jain College, I was allowed to attempt the Thal Sainik Camp, which had army men training on the same obstacle courses with a rifle on the back along with the cadets. It had different kinds of shooting competitions within NCC units of colleges and battalions. That hard physical training enabled me to get my stamina up. Until then, back in school, I couldn’t finish a 400m race properly. With the training I got while attending the camp, I went on to complete a half marathon in 1hr 44mins and a 50km ultra marathon in 7hrs 25mins. Therefore, NCC did give me a boost of confidence to carry on and do better.

Your favorite/pet category in shooting

I love the 50m event as it is very technical and challenging with varying wind conditions and lighting conditions. By the way, the bullseye size is as small as a 50 paise coin and we aren’t allowed to use telescopes to see. It is a naked eye shooting!

What is the most essential attribute that a shooter requires?

The most essential attribute according to me would be the ability to deal with emotions, negative or positive.

What is your daily routine? What kind of exercise regimen do you have?

When I am training for a tournament, the day usually starts depending on my state of mind and physical wellbeing. I follow a tailor-made program, which is based on what I need to work on my condition on that given day. Usually, the day includes fitness in the morning for about 90mins followed by training at the shooting range for 3-4hrs a session. Sometimes it will be two sessions a day. The exercise completely depends on the current form and keeps changing, but as a shooter, cardio is an important aspect.

Your proudest moment at the shooting range so far

Well, there is not one but many. The one that stands out so far under tough circumstances was winning the national championship title in 2013; it meant something special. My mom was in the stands watching the final round and it was an unusually packed day at the shooting range. The best of the best in the shooting were there from all over the country.

What was the feeling when you beat one of your mentors, Gagan Narang, on that day?

I don’t consider I beat him. It was a self-enhanced performance and I was able to do exactly what I wanted to do. It was like winning over my inner self. The other sweet part of the win was that on a very rare occasion, civilian shooters like me, Gagan Narang, and Joydeep Karmakar (who finished 4th in London Olympics) were ahead of the army, navy, and air force teams which dominate the event across the world. We civilians usually have access to probably 30% of the resources compared to what they have.

The backing you received from senior shooters like Gagan Narang and Abhinav Bindra, how has it molded you?

I consider it very valuable as they have been the torchbearers of the sport and they carry immense experience and knowledge gained over the years. They have been very approachable and helped me retain high goals.

The support you received from Jain (Deemed-to-be University), family, and coaches

I received immense support from Chenraj sir. He has been backing me through the ups and downs and believes in me more than I do. That is something that has pushed me a little extra at times. I have great respect for him. My immediate family members have been a great strength. I did get to spend some time with a few coaches from Hungary and Russia; that changed my perspective towards the sport!

Your elder brother and you have developed an electronic target named “Elite Scorer”. Tell us about it

Well, if the sport has to reach an audience, it needs to be spectator friendly, and if a kid these days needs to get attracted to a sport like shooting, where, conventionally paper targets are used at distances; it is not the ideal way forward. Hence this idea was born of the electronic target, which can instantly display the shot location on the target over to the laptop wirelessly.

Do you think it will make shooting more affordable and accessible to the people?

This has spiked the interest among the youth who find the shooting sessions more meaningful and fun. Usually, the shooting ranges are set outside the city limits and not accessible for school- or college-going kids. With an own target at home for a 10m event of .177 caliber air rifle, which doesn’t require any arms license or permissions to purchase, all you need to do is set up the shooting range and start training. It is very handy in terms of time saved by not traveling to distantly located shooting ranges and spending more time on training instead. The best part is that the Swiss-make, which is the market leader, is triple the cost of what we have manufactured in India. So “Elite scorer” is more affordable to aspiring shooters.

What would be your advice to the coming generation of shooters?

I still consider myself a present generation shooter (laughs). Well, they need to train harder and smarter than I do, to beat me, and I will still beat them (tongue-in-cheek).

What is the next thing on your agenda as a shooter?

I am looking forward to self-fund some major changes in my gun and that needs to be imported. After that, I shall begin my training for world-standard scores and performances and l will look forward to getting them when I need them the most. I have realized that competitions will come and go, but my area of focus should be on whether I am ready or not.

Apart from shooting, what are your hobbies? Do you follow any other sport?

I have been golfing lately and find it very close to shooting on the mental aspect. Other than that, I love watching and playing football, I follow MotoGP and F1, and I follow a little bit of tennis.

I am looking forward to stabilizing myself and get back into shooting again with better preparation and my ambition from day one has been to become a national champion first and then have a go at the world championship. I was 5th at the junior world championship while I set a new national record, which still stands after 5 years. I will look forward to much better finishes at big events.