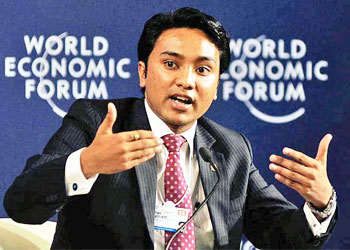 Bengaluru is the city where dreams come alive and so it was for a young Suhas Gopinath who dared to dream. At the age of fourteen when kids of his age were pulling his leg for not owning a personal computer, Suhas gambled on the idea of freelance website designing. He wanted to prove his mettle to his peers who ridiculed him. Suhas invested his pocket money of Rs.15/month in an internet café near his home to learn all he could about the World Wide Web. His meager earnings could not sustain his ambitions for a long time even with the help of his elder brother. It was his first negotiation, his first entrepreneurial deal with the Café owner that distinguished him from the ordinary. His school hours ended at noon, so he made a deal with the Café owner that he would sit at the café during the lunch hours when the owner went out to have lunch. In return, he browsed the internet free of charges. Suhas presented his idea in such a manner that he made the owner believe that it was a favor, an act of kindness. The journey of “World’s Youngest Entrepreneur” began there.

Turn the clock to 2015, Suhas is twenty-eight and the owner of “Globals Inc.”, a company he founded when he was all of fourteen. The firm provides innovative solutions on web and cloud, enterprise application development, and product development services for various industries like education, government, media, online, and financial services. “The fire in my belly was ignited at Jain Ventures. It is very hard to find a mentor who matches your wavelength and who is also a first-generation entrepreneur, who has faced similar hurdles, so in my case, I was fortunate to find Chenraj sir. With Jain Ventures, the best part is, it is like an m3 that is mentorship, marketing support, and money.”

Suhas is quick to add, “Money is a very small component in the success of an entrepreneur. It is certainly having the right mentor who can motivate you always, who can stand by you at your hard times, that matters the most”. Suhas has had a rollercoaster career so far. From being a minor who could not sign his entrepreneurial deals to being one of the leading entrepreneurs in India, it has been an exciting occupation. At times he too feels lonely, “As somebody who started very young, I have always realized that at the top it is very lonely out there. At times, I feel that I missed out on a normal childhood and the simple thrills and frills of growing up”. The man who has modeled himself on Bill Gates is not disheartened though. His ultimate wish is to meet Bill Gates in person one day. Suhas is still young as far as CEOs go, but he is a veteran when it comes to entrepreneurship and it can be assumed that he will enterprise his way to his wish sooner rather than later.